... and thought rather than derail that thread by saying "I also have a Flickr account", I thought I'd start a new thread instead.

I only started taking a serious interest in photography this year, when we went to Italy and Austria - I was fed up of grainy/blotchy camera phone photos, and hadn't had much luck with bridge cameras or pocket point-and-shoots either, so I decided to treat myself to a DSLR, and got myself a Canon EOS 1300D.

It's essentially just about the most basic model Canon offered, and was relatively cheap, but it seems to be quite a nice body for beginners. It's a crop-sensor camera, which is common for DSLRs in this price bracket. It came with the basic Canon EF-S 18-55mm f/3.5-5.6 mk. III non-image stabilized kit lens. I like taking pictures of birds and other wildlife, so I also picked up a used Tamron A17 EF 70-300mm LD Di Macro telephoto lens off eBay. This lens would only have been around £100 new, so not a top-quality bit of glass by any stretch, but I got it for £50. It did the job.

Mrs Highlander has also gotten into photography; her being somewhat smaller than I am, I picked up a used Canon EOS 100D. This was, at the time, the world's most compact and lightweight DSLR camera (it's since been replaced in their lineup by the 200D). Bonus is that she can use the same lenses as I do, so I bought it without a lens, and gave her my 18-55mm kit lens and the Tamron 70-300mm zoom. Trouble is that she likes macro photography, so I found a bargain Sigma 50mm f/2.8 EX DG Macro lens on eBay - it's a really beautiful bit of kit. And, she likes landscapes. So to eBay we went again, and came away with a used Canon EF-S 10-22mm f/3.5-4.5 at a bargain price.

Both our accounts also contain some shots taken with various phone cameras and point-and-shoots we've had over the years. She travels a lot more than I do, being friends with other globetrotters, so there's photos in her Flickr from more exotic locations than I've been to. Since she's picked up the hobby, we've been to Loch Ness, and we've been to Skye. She's off to Indonesia and Singapore soon, and Vietnam later on in the year.

I've also recently got to thinking that I could fairly easily transition up to using a full-frame camera; my EF-S 17-85mm lens is the only lens I use that's designed for a crop-sensor camera. So I may be saving up for a used Canon EOS 6D. I also have a Canon EF 28-90mm lens I picked up for £20 on eBay; it's a bit of a junk lens, but would "do" for a bit until I can get something a bit nicer.

Longer post than I was anticipating, but it's nice to have a hobby

I tried to get into photography when I was younger - I had an old Practika SLR with about 3 different lenses and about 20 drop in filters.
I wasn't bad, but this is pre digital (say 1992?) and sadly I had all my stuff stolen out of my Fiesta Supersport when parked in Tesco....

However, my good friend Dean has gone from strength to strength with his photography - he gave up his job in a local timber merchants to do it full time and with great results. He now has a couple of hides built in Wareham and does daytime courses on wildlife photography.

Now he is a little more successful - the boy has done well.

Highlander and Mrs Highlander, I shall look over the pictures when I get some time - looking forward to the images.
1999 T4 family wagon
2005 Vauxhall Meriva
1998 406 V6 Coupe - Midlife crisis..!
PP2000 user, can help with faults / diagnostics in the Bournemouth area.
Top

Those 2 teddies have traveled well

I know nothing about photography but do appreciate it when you see decently-taken shots like on that there flickr.

My pics are usually hastily grabbed on a mobile, like this one one winter when this little fella came over to see what I was doing in the Garden I had just defrosted the drinking water one morning: 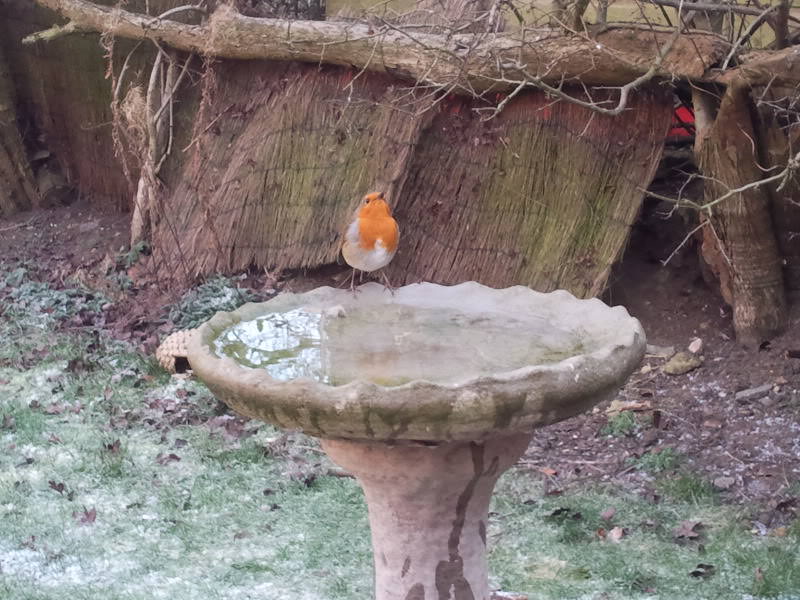 At one point they had their own Facebook page... She loves those little bears. They have been to a lot more countries than I have

I live in a flat and don't have a garden of my own. There's a communal "garden" area (read: uninteresting narrow strip of grass out the back between the washing lines) but all that really ends up there are bloody seagulls. They've bullied out all the blackbirds we used to get, now that they've figured out the blackbirds trick of drumming their feet on the grass to get the worms to come up. When the gulls can't get enough worms, all they do is sh*t on the cars and rake through the bins. I'd be very happy to have a little robin posing for photos like that.
2002 (D9) Peugeot 406 Coupe SE, 2.2 litre Petrol. Scarlet Red/Rouge Ecarlate/Rosso Scarlatto. Black Leather interior. SOLD

Some lovely photos there Mr and Mrs Highlander

I love the Salzburg photos as I visited there many times.

I have some rather expensive camera gear...I just got a new camera and lens, Canon 5D MkIV and a Tamron 24-70 f2.8 G2.
I also have the Canon 100-400L MkII and the Canon 100mmL IS macro lens. I recently sold my 7D MkII and Canon 200mm lens.
I have my old 6D in a cupboard doing nothing. If you want a cheap one that is far from Pristine I could do you a deal. As you can see from photos in flicker that I took with it, the picture quality is fab!
I have a wireless remote for the 100D which you can have for free if you want it...been lying around in my bag for yonks!

I love my photography, it keeps me sane, especially since I retired from fixing motors.

Ginger, I know who the guy in your link is...quite a few of my Facebook photography group people visit him and have posted photos taken at his place.

Those Dean Mason photos are stunning!
Cars in my care: