Sorry if you've already said but will the new bike be 'in addition to' or 'instead of' the Yammy?
Cars in my care: 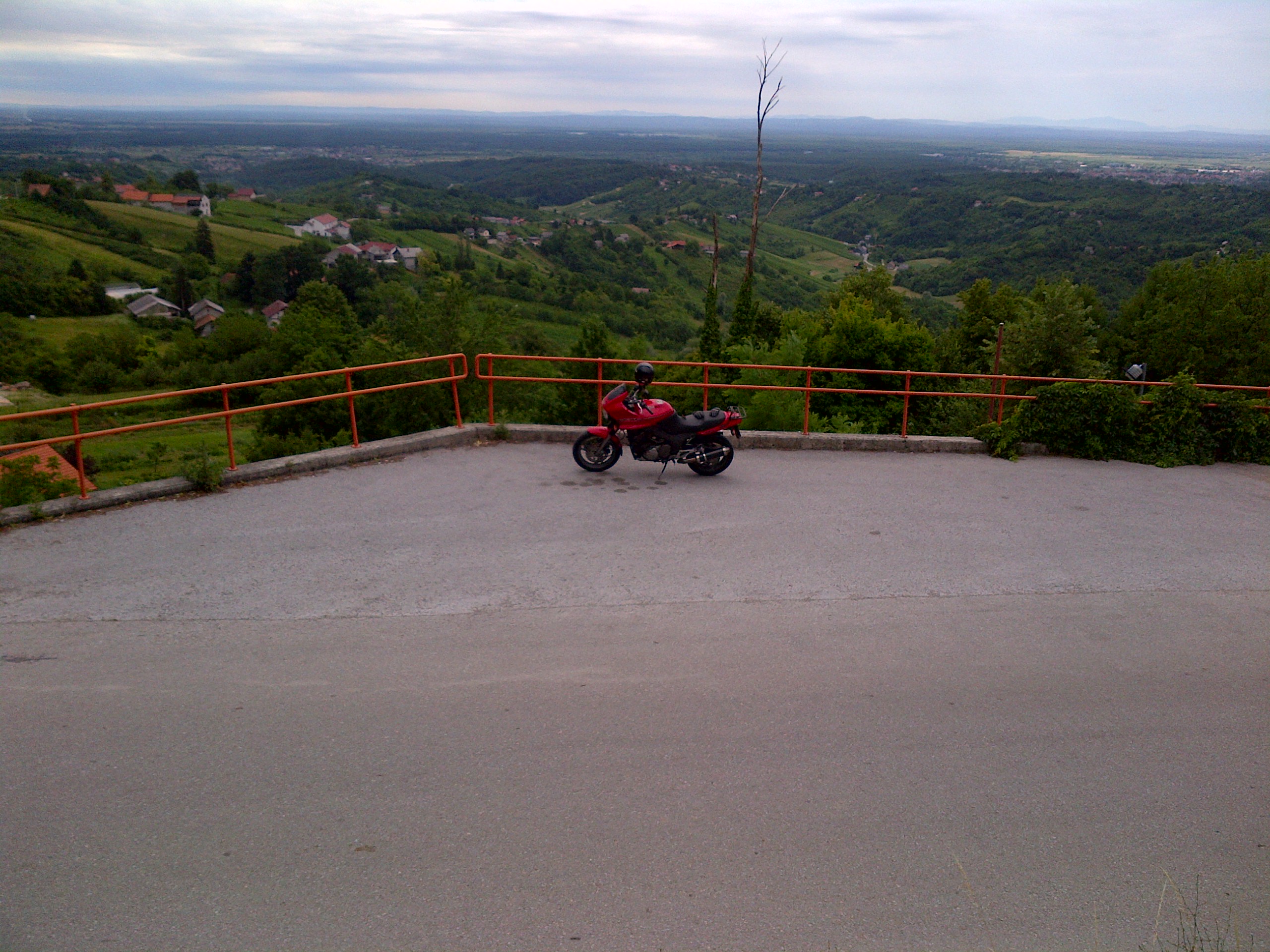 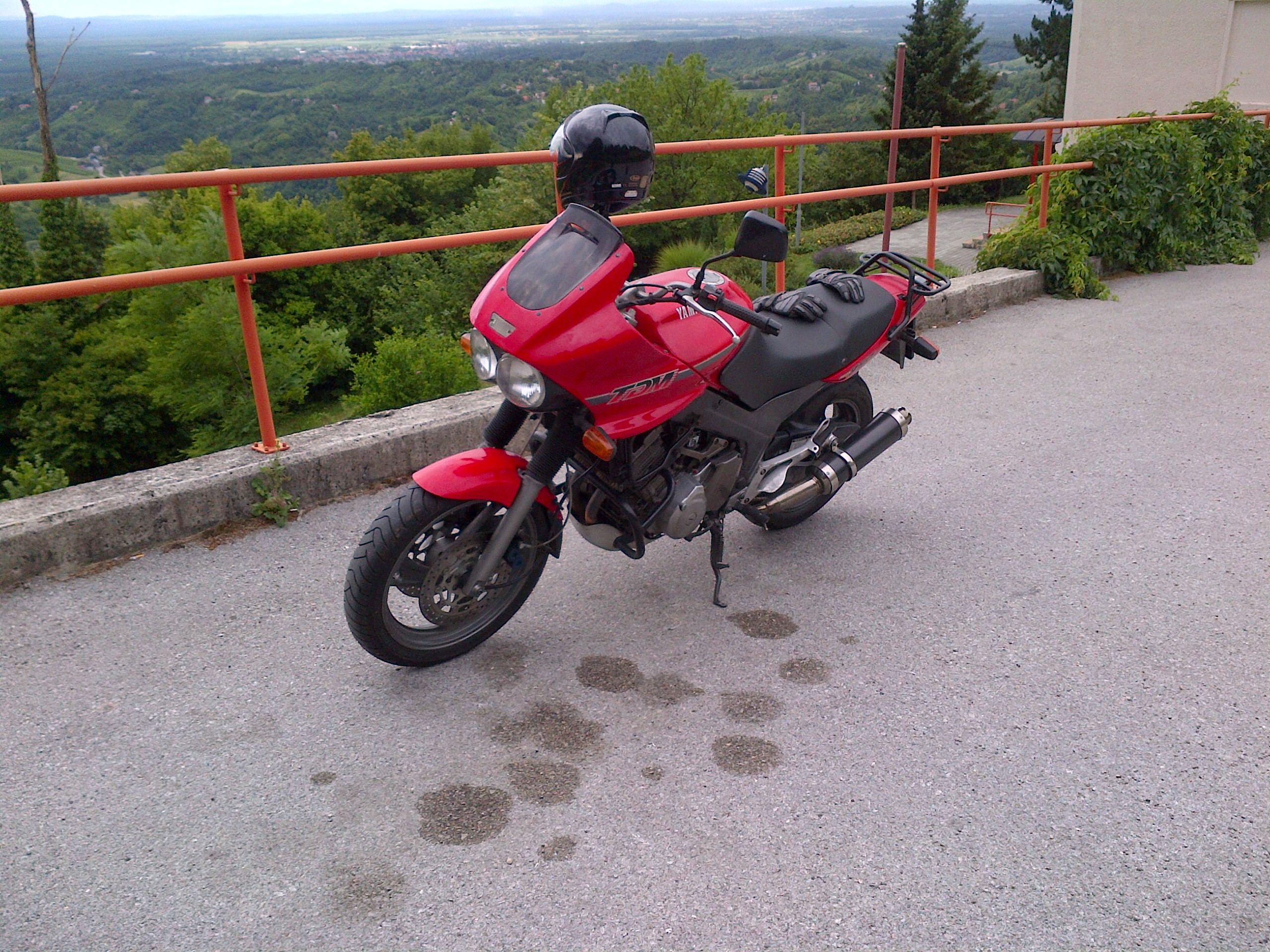 It made it to Svete Jana!

And then it fowled a plug on the way home

And then I got nicked

I'll explain. Last year they had the old station road up to lay a new, er, something. They never put the surface back so it's a dirt road, with potholes and sump-height raised drain covers. Then, about a month ago, they shut the bottom end of the High Road, making a roundabout apparently. Traffic was diverted to the old Station Road

But only for a day and then they closed that too, now cars are diverted to the bypass, which is also incomplete, ending at someone's garden. So traffic is forced to filter through side roads, past the local clinic, 2 schools and a kindergarten. Smart. I have to go this way any time I want to go anywhere. They've also turned the last road, which is where you end up if you didn't want to run over any kids, into a one way closed to traffic from the high road.

I knew this, having seen it many times, but when the bike started misfiring again I just thought "straight home, avoid traffic" and forgot all about it. I noticed the sign at the last moment and I was just thinking "should I turn round or will it be ok?" when a WPC stepped out in front of me waiving a cooking spoon ("Police stop" on something that looks like a fly swat). 250Kn thanks for nothing

I also asked her how long this silliness would be for, however I can't remember if she said 3 or 4, or 4 or 5, because I was too busy taking in the MONTHS

TBH I'd prefer to have both. Err, all 3 that is. But then I'd have to insure the new bike on a separate policy (with no NCB - I can't just swap the policy between bikes like I used to do back in Blighty) and I don't really have the space (as evidenced by me just having fallen over the lawnmower

). Plus t'wife objects strongly. I thought maybe I could get the Yamaha back running, get some riding in (I've probably ridden 500 miles in the last 15 years) and then move up to something better next year. I love the TDM, it seems to fit me just fine, it's comfortable, I'm used to the handling, it's stupidly fast if I want it to be and it's not worth that much, so if I total it never mind. The problem is it's going to be a cascade failure, if we ever get the carbs sorted then something else will let go. If I really want to get it back how it was I need to spend a lot of cash on stuff like brake disks, bearings, suspension etc. And what about parts that I can't get any more? If it blows a hose then it's in the bin.

Great! a non-compassionate fine from a jobsworth

surely a 'sorry' from you on yer 2-wheels would've cut it on this occasion but obvs not - and they wonder why they get a bad name...

I know exactly about your old bike, sure you can fix everything again, you can even get silly-cone hoses made/adapted (££££) but it will take a LOT of your time up. Even my stupid sump washers took an hour to order (after measuring/checking/measuring/measuring/measuring) and sometimes you just think f*ck it life's too short for dicking around with stuff.

Might sound silly but as a compromise have you checked out the range of E-Bikes available now? they look a lot of fun as a hobby/project and would be far cheaper than a motorbike/get her indoors approval? I've seen some that do 60mph

check out Andy Kirby on that YouTube. I've been thinking about one for my reasonably-fast commute WCPGW etc....
Cars in my care:

Nah, the cops are like that here, once they've got their claws into you they aint letting go. It counts as government income and they need every penny. They probably have a quota. They're not adverse to making things up either (e.g. the parking space that suddenly wasn't) but this time I had no excuse.

I was looking at a thread over on the TDM owner's club about hoses, they were talking about making them up from silicon. I dread to think what the result would look like, all joints, elbows and 2 dozen jubilee clips...

An ebike? Er, no. I had a look at Andy Kirby's channel, 8 minutes into the top vid on there has him begging a shop owner for a top-up, otherwise he didn't think he'd make it home. Also, riding on the pavement? It's illegal to ride a full size push bike on the pavement in the UK, does an ebike not count?

Many years ago you could get a motor to go on your pushbike, they weren't very powerful but better than peddling. Then the government decided they had to be registered, taxed, insured like any other road vehicle and it killed them dead overnight. I'm wondering how long it'll be before ebikes go the same way...
Unskilled meddling sin©e 2007

As it's now illegal, I think, to retail new ebikes that can go more than 15mph, I think the government here would
have a hard job trying to go down the tax, insurance route. They're currently looking rather stupid, and retrograde,
in their attempts to control the use of e-scooters.

In addition, during lockdown, sales of bikes in general have rocketed.

As bikes are green, sustainable etc.., a government getting all heavy would be a huge own goal, I think.

15.5mph https://www.gov.uk/electric-bike-rules Not that a pedal cycle is incapable of exceeding that. Oh I see

should not be able to propel the bike when it’s travelling more than 15.5mph

So you can go faster than that but the motor won't be helping you.

I can imagine Welly on his way to work, in amongst the heavy traffic, a mobile road block. I wouldn't fancy it anyway

That seems to be their stock in trade at the moment.

Green? Any idea of the amount of pollution mining and manufacturing those batteries produces? Never mind where they end up when they're done! Anyway, I'm sure once the government notices the amount of fuel tax revenue they're loosing they'll be looking straight at these electric snails. Remember when diesel was cheaper than petrol? Oh yes, but apparently diesel is more polluting, so now we've incentivised driving them we've got a good excuse to reap the harvest.

TDM's came out in 1991, I have one of the first, with consequent low frame number. They still look good to me too, lots of the modern bikes I've been looking at just look like cheap toys.
Unskilled meddling sin©e 2007

You can do your own 'build' with a hub motor capable of silly power/speed but it would be a right faff registering it as a 'motorised vehicle' and all that caper.......

Mind you, it is very quiet around where I live.....

I reckon if you're thinking of trying out one of them there 15.5mph speed machines you should add some very large rear view mirrors...

Btw that 15.5mph seems a bit odd to me, a bit of a weird number. But then it does equal a smidge under 25kmph, I wonder where it came from

25kph is where it comes from.

I see the practical issues with allowing these gadgets to be used safely, but they do make sense as an alternative form of transport. What's needed is genuine segregation from both pedestrians and traditional motor vehicles.

Ebikes can go anywhere a normal bicycle can go, so they can already use cycle paths (where available

Back to proppa bikes, I've been watching this guy
x94PGgYKHQ0
The annoying presenter thing soon goes when you realise how much sense he's talking. He's Canadian, so a a fair of it doesn't apply, much does translate though, and I did notice one of the crash hats he recommended elsewhere is one of those I was perusing here.
Unskilled meddling sin©e 2007

Today I've amazed myself by getting recalcitrant Labrador to use a dog ramp to get in & out of the car twice.

Some compensation for waiting over 3 weeks for it to show up, failing to get a delivery date after chasing several times, giving up and buying a 2nd hand one on Fleabay for £13.60.
(Got outbid on a previous one that went for over £40).
Within hours of 'winning' this one I got an email stating the new one would be here on Monday.

That is pretty amazing

Could you try sending it back? Other than that BNIB...
Unskilled meddling sin©e 2007

I know that CV-19 is being blamed for everything now but I too have been arsed about with deliveries lately.

I 'plan ahead' when I do stuff so got myself a list of parts needed to overhaul the Lawnmower which has been disgracing itself by leaking petrol onto the Wooden floor of the Shed...which now pen-n-inks.

Ordered a genuine Gasket Kit which was "dispatched" 6th July and "might" be delivered 15th July. Or something.

You know when you kinda look forward to doing a repair but then don't have all the bits you need...

Post is variable here at the best of times, recently we ordered some computer-type stuff from Zagreb and a centre stand for the Yamaha from the UK at roughly the same time, guess which got here first

we chased them up and the Croat postal service said they'd left the country but Parcelfarce said they never got to GB. In the end the pension's co. decided, due to Virus McVirusface, that email would be fine

I presume it was happening quite a lot.

Meanwhile (speaking of waiting for parts) I had the Yamaha in bits again, I can't see anything obvious so I checked the float level (they're supposed to be sensitive to it), misfiring cylinder slightly high. I fiddled with the mixture screws (it's ok, I made a note of where they were) and also found the choke cable had no slack, hmm. Put it all back together and... it sounds just the same to me at idle, Brrrrrrrrrrrrr-b-b-b-brrrrrrrrrr-b-b-b so I think I have once again achieved nothing. I should take it for a test ride but t'wife left for Korčula this morning (an island in the Adriatic sea, rhymes with "torturer") she'll be gone for 3 days and I'm in sole charge of the animals, so maybe I should leave it until she gets back. If it's still misfiring I have a few ideas gleaned for the owner's klub but the idea of ordering stuff, waiting 3 weeks, taking it to bits, changing them, putting it back together again, then finding it still misfires.... Nah, to Ivo it goes, fuggit.
Unskilled meddling sin©e 2007