Did some shopping today, mid-afternoon.
Waitrose, a long empty shelf where the toilet rolls usually are. Asked an assistant if it was like
that when they started today. She said they'd had fresh supplies delivered, but everyone had descended
on them this morning. All gone by 9.00.

Although I'd bet if you saw any you'd load up your trolley to avoid this in the future. I would.

I'm hearing that a lot here (although the war they're talking about is a bit more recent). Yep, economies are going to go tilt, a few governments are going to tumble, it wouldn't even surprise me if there's an invasion or two in the aftermath, depends how bad it gets I spose.
Unskilled meddling sin©e 2007

Meanwhile... I've not seen this on the BBC. Nothing terrible where we are, a few tiles fell off the firehouse but that's not so unusual

Whoever suggested unplugging 2020 and restarting it may have a point.

I've not been watching much of the corona news (too much stress) but I hear from my family back in Blighty, queues of cars outside supermarkets, lots of empty shelves, old ladies getting knocked to the floor so people can grab another bale of bog roll. Things seem pretty good here, the panic buying seems to have died down quite a lot, the roads are empty and everyone seems to have accepted the changes with good grace. Lots of stuff is closed (Max is pretty pissed off about the bars, boo hoo), the schools are closed too but the kids (and now the teachers) are working from home via their pc's and tablet computers - I've just been battling with Adobe Connect (oh not, not bloody Adobe

) so my wife can attend a teacher's meeting.

Will it be clothes next? What about money? That's still going from hand to hand...
Unskilled meddling sin©e 2007

This Corona lock down is doing my vehicles a bit of good, Both cars washed, Mine fully waxed and cleaned out. Two motorbikes washed and ready to polish. Garden strimmed, trees pruned and grass cut. Must be beer o'clock....
Top

Hi guys, how y'all doing? I was in 2 minds to post about this, with all the other bad stuff going on, but bear with me, it'll get better.

Last Friday we had Mary Dog pts, she'd been having problems with her ticker since January and the drugs had stopped helping her, she threw everything up on the Wednesday, Thursday she wouldn't eat anything at all and she was coughing constantly trying to clear her lungs. Mirela, our marvellous vet, said she could try draining them, but it wouldn't last long so we'd have to keep coming back and Mary hated the vet's. So the decision was made to end her suffering before it really got started. 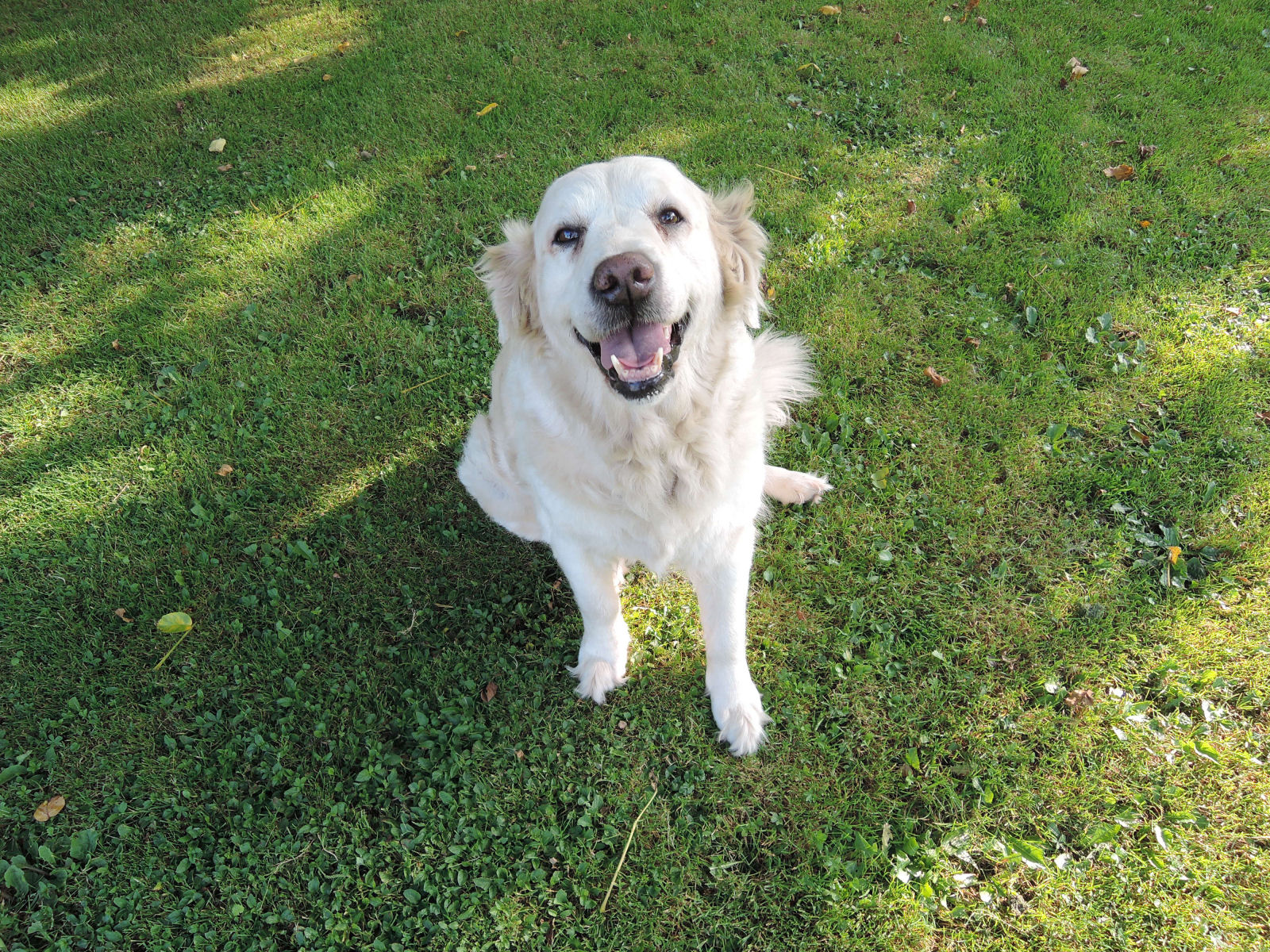 We weren't so upset as I expected, but then it's not like her sister Vicky who died suddenly 5 years ago, we kind of knew this was in the pipeline. Another worry was this blasted virus, what would happen if we were locked down and we needed to get her to the vet's in a hurry. And Mary was almost 13, life expectancy for a golden retriever is 10-12, so she'd had good run.

Later that Friday I had to take young Archie in, looks like a mouse, rat or vole has bitten his cheek, so he's on antibiotics. While I was there I saw a nice little dog behind the counter, a bit shy but quite friendly once I started petting him. Mirela asked me if it was too soon for another dog, I said I wasn't sure, I'd have to ask t'wife... 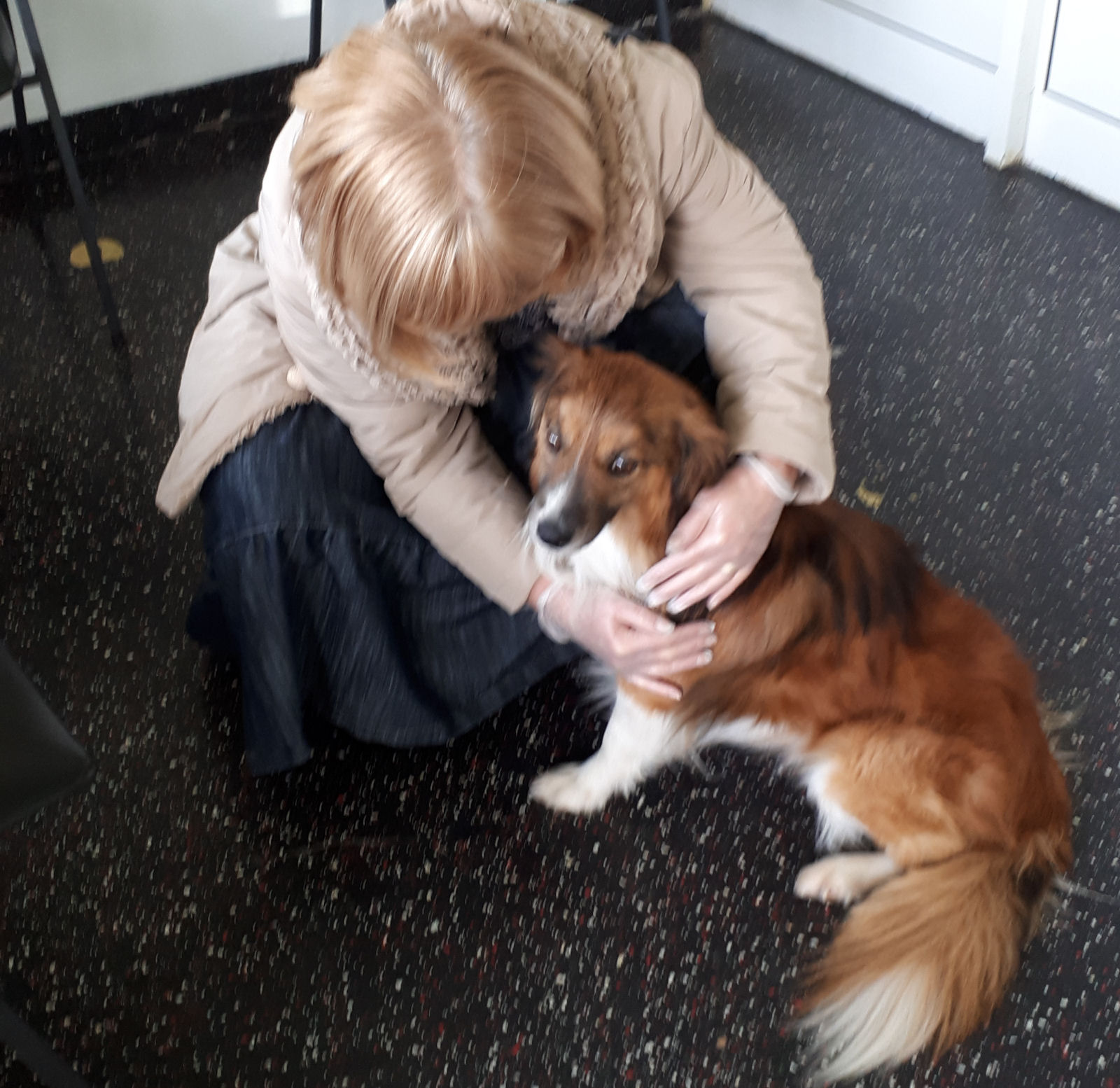 4 year old dollymixture, name of Medo (Teadybear), he'd been brought in because he caught something nasty from a tick, then Mirela found he had an undescended testicle that would cause him all sorts of problems in the future. His old owner (a pensioner I think) decided what with all that and Virus McVirusface too they'd prefer it if he could be re-homed. 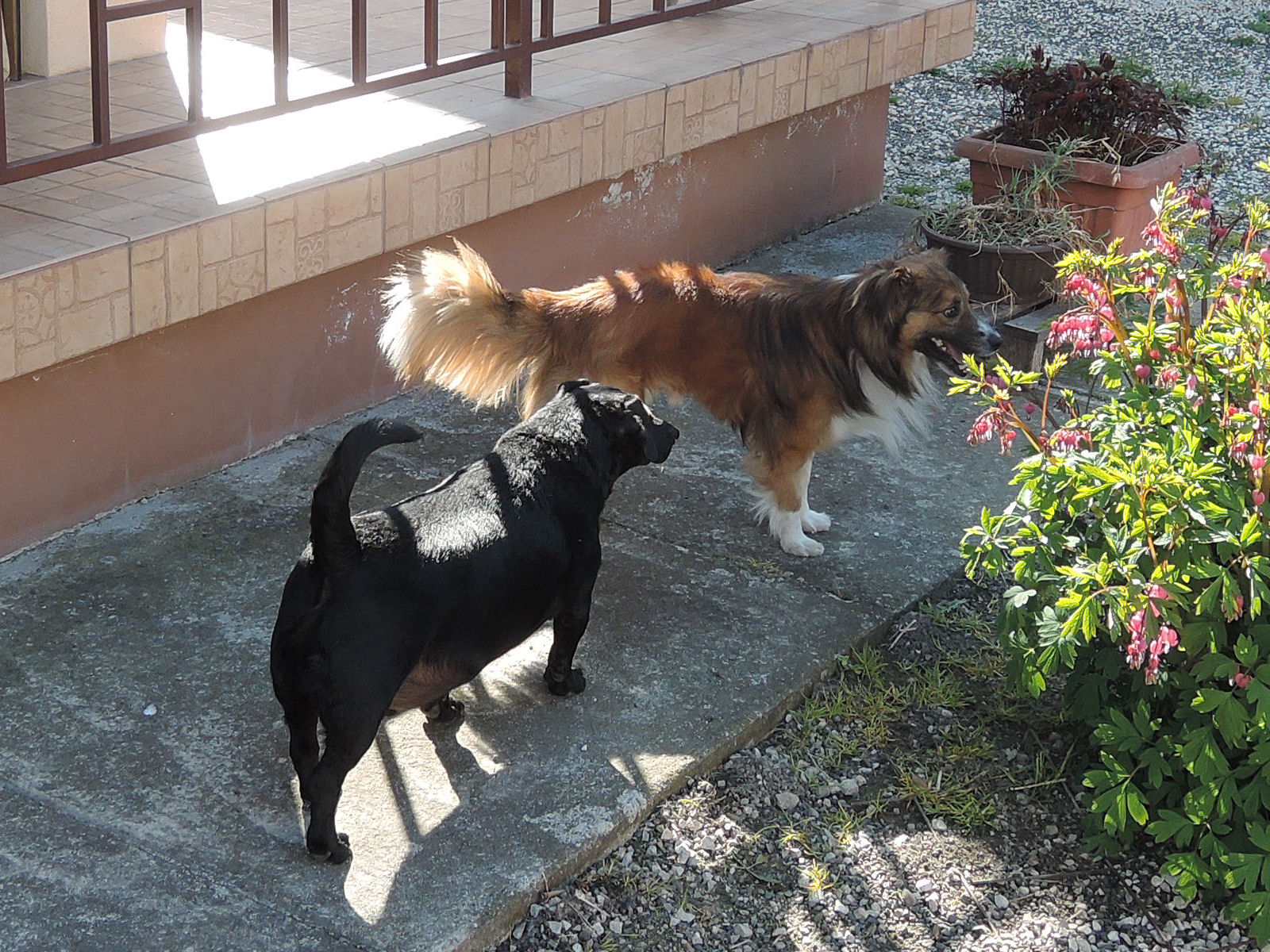 Lots of bottom sniffing and growling, the cats were terrified 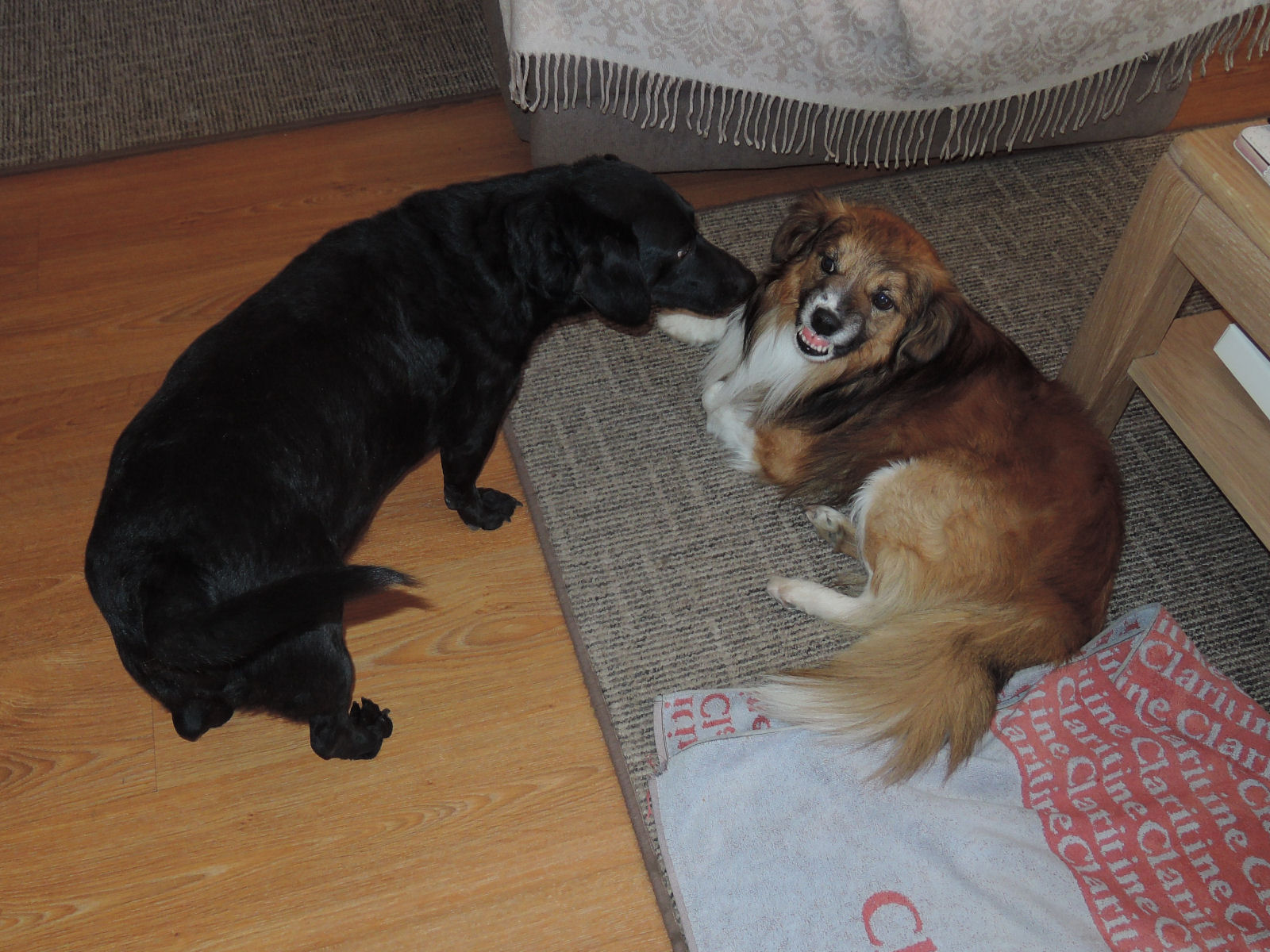 He currently weighs 11Kg, but this will change. As Medo is a very common name here for a small dog we decided Teddy would be a good adaptation. It's only his first day but he seems to be settling in ok, not so bothered by the cats who are cautiously curious now. Scooter's still a bit in shock but he'll survive. He's been following me around all afternoon and got a bit miffed when I went to the garden but wouldn't let him out (no fences)

Those teeth in detail 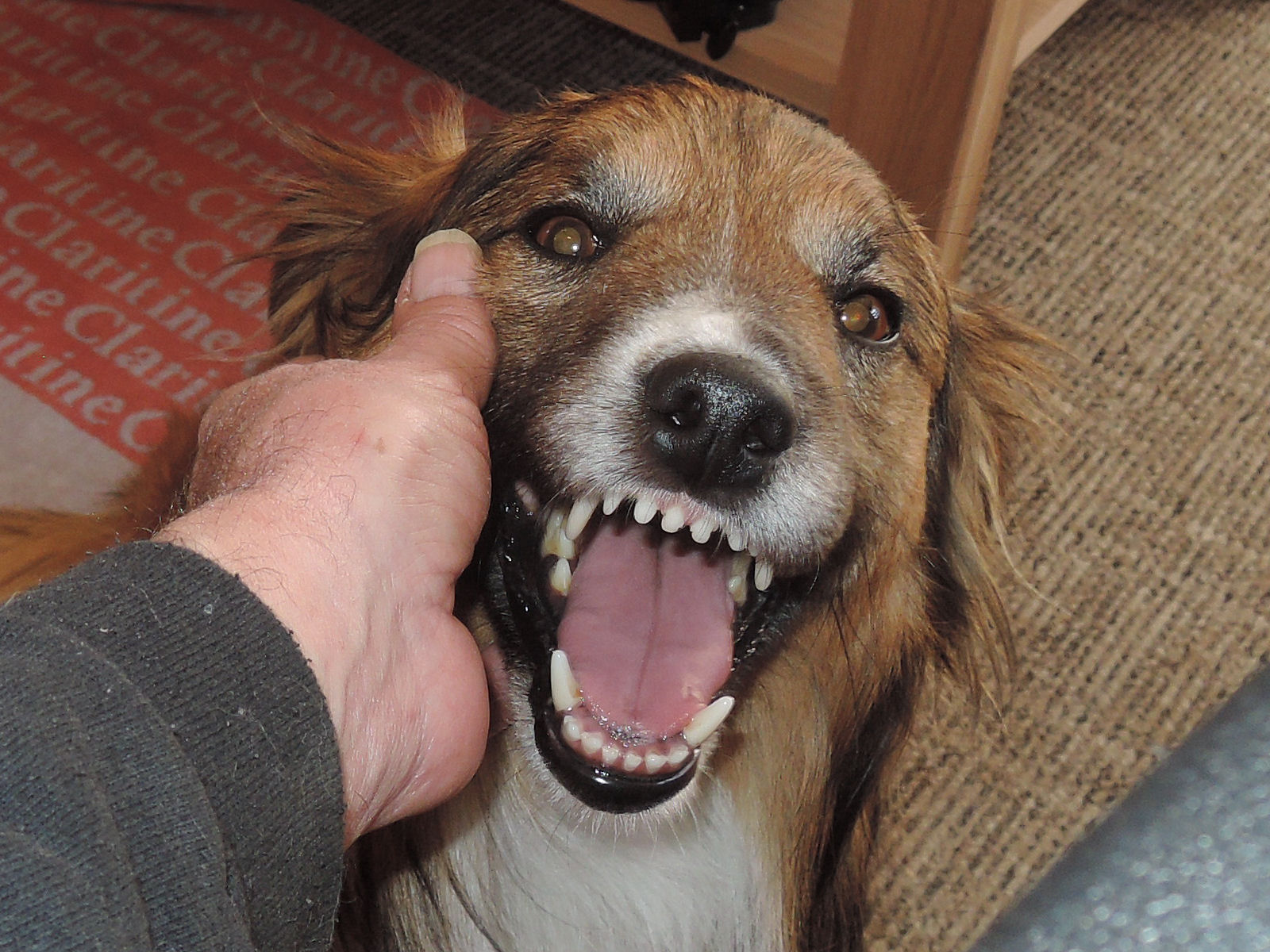 I'm sure the exercise won't do you any harm

Teddy is still growling at the cats, apparently he lived with one before but maybe he's overwhelmed with how many there are here. I've just been for his funnel thing as he's started licking his stitches again. And, unfortunately, after neglecting him while we've been too worried about Mary, now we find Ollie has a tumour on his bum. He's our previously abused and starved rescue (mostly) golden retriever and, because he was starved, we've never denied him anything so he is rather overweight, which means if he needs surgery it'll be a big risk. It all depends on what sort of tumour it is. Bugger.
Unskilled meddling sin©e 2007

Just checking in here, all ok with us.

Sorry to here about Mary

One thing is certain though, any animal in your care certainly gets the A1 treatment - you can be proud of that for sure

Ah, there you are I was starting to worry

Thanks, we still miss her but we're confident we did the right think for her.

Yeah, they're all spoilt but, you know, they're our family. The 3 kittens will have their first birthday on the 23rd (already!) and I'm wondering what we could feed them for a treat. Not that the little buggers don't get treats every day...

I made 3 trips to the vet's today, firstly Ollie (gippy tummy, all ok now), then Teddy (staples out, all done now) and finally young Archie as Mirela was concerned his face was taking a bit too long to heal (it is finally healing though). All done for now but I'm sure we'll be back before too long.

Good to hear you're all ok.

In other shocking news, I is 65 today.

The years just fly past... I suspect that our perception of time changes over our lifetime, so each year is measured against the years we have already experienced and become proportionately shorter by comparison. Or maybe the older we get the less we worry about past and future, just getting on with the present and so loosing track. Or alternatively, we're slowly loosing our minds.

I'll be 55 in a couple of weeks, who'd have ever thought?

Yeah, I'm watching the cats (& pets in general) stuff, I hope our idiotic neighbour doesn't see it as an excuse to start shooting our cats again. From what I read there's very little chance of them catching the virus (is it 2 cats, 1 dog and a tiger so far?) and no proof whatsoever that they can pass it on to other people, except as vectors (or whatever the term is now) like any object that's likely to be touched by different people. So basically don't pet other people's, erm, pets.
Unskilled meddling sin©e 2007