I agree with wife

Have you seen the new Defender?

I don't waive at anyone here, nobody gives a toss anyway. Bikers generally waive at each other though.

We were at a wedding in Zadar over t'weekend, tw'fe's god son. My, how the other half live - he's driving a brand new black Aldi A6 estate while the best man's got a brand new Bimmer X9, also of the same colour palette (I think it said X9 on the tailgate, massive thing anyway). Church wedding? No, only the bleedin' cathedral will do. Afterwards in some brand new massive wedding hall, not one but 2 mariachi bands (no. Just no) and a live band, crap music as per with the volume turned way too loud (t'wife says she'll be joining me with the ear plugs next time). Spent the night in somebody's apartment in Biograd na moru (Wastown on sea), single parent mother, so everything was either broken or not put together properly in the first place. It's a good job I didn't have any tools with me, I suspect I'd still be there...

Pictures? Hell no. I've taken them at weddings before, I never look at them. Plenty of other people taking pictures anyway, especially outside the cathedral with all the tourists rushing over to see - clicky, clicky.

The journey down was fine but the journey up on Sunday was with all the tourists coming home from the seaside. I've got the Yoyo CC'd at 100kmh as per (any faster and the Yoyo starts drinking and t'wife starts making strange noises), so I've got idiots in (almost exclusivly) German cars screaming up from behind and overtaking so closely the Yoyo wobbles all over the place. Overtaking anything soon results in some black Nazimobile 1 meter from my back bumper. I had some dolt in (I'm sorry to say) an old Volvo tailgating me for about an hour, sometimes he's quite a way back, sometimes he's right up me chuff (cruise locked on 100k remember). At one point I was behind a queue of cars, there's the usual idiots overtaking at autobahn speeds and we pass a service station with 4 cars coming out, none of which look like they're going to slow down either. As they got to the end of the slip road it started looking a bit risky, I can't speed up, can't slam on as I've still got Victor Volvo almost in the boot, so I took a chance, floored it and lobbed out into the loonies overtaking. 10 minutes later Planet Ovlov is back

Eventually I tucked in behind a lorry doing 75, waited for a load of cars to come up from behind, floored it out in front of them and left him there. I didn't see him again.
Unskilled meddling sin©e 2007

Have you seen the new Defender?

The entire point of the Defender is rugged simplicity.

Especially when the timing gear falls off

Closest to rugged simplicity these days is a Niva but I think the rust comes factory-fitted.
Unskilled meddling sin©e 2007

The new Defender is full of electronics and touch screens, I can't see it appealing to the sort of people who bought 'proper' defenders back in the day, I guess they've targeted those trendy hipster wankers who want to look like they're outdoor country folk when they really live in Chelsea drinking Latte Coffee and eating Lobster in fancy Restaurants

What do farming types buy now? pickup's I guess.
Cars in my care:

Today, I managed to replace a microswitch in my passenger seat (and make it work

) and also spent time* and effort* adjusting my handbrake ready for the MOT that was due last week.....

I replaced the rear discs, pads, shoes already ( calipers in the next day or so..) and my handbrake was still very 406, so a quick strip down, wire brush and more adjusting was required..

Welly wrote: ↑
Tue Sep 10, 2019 5:13 pm
The new Defender is full of electronics and touch screens, I can't see it appealing to the sort of people who bought 'proper' defenders back in the day, I guess they've targeted those trendy hipster wankers who want to look like they're outdoor country folk when they really live in Chelsea drinking Latte Coffee and eating Lobster in fancy Restaurants

What do farming types buy now? pickup's I guess.

Yep. My landlord is a farmer. He's always complaining how difficult it is to actually find
a bog standard, no frills pick up. His reference point for an ideal pick up is the Peugeot 504 diesel
that he had years ago. ( I think most of them ended up going out to Africa for extended lives, once they'd failed
the MOT a few times here ). His current drive is a basic driver + 1 passenger cab, 2 wheel drive...
Mitsubishi, I think. He almost had to twist the dealer's arm to get it. Dealer makes more profit from
the blinged up ones.

I spend a fair bit of time working around the Costwolds and noticed a lot of farmers moving over to Dusters, certainly their Wives etc. Unfortunately the Duster will only pull 1500kg so I can't see them being the complete solution.
2018 Volvo V40 D3 Geartronic Inscription My Daily
1996 Land Rover Defender 90 County SW 300TDi My Toy
2003 Ford Mondeo ST220 3.0 V6 My Other Toy
2006 Saab 95 Vector Sport TID Auto My Wifes
Top

I've been reacquainting myself with the meteorological and political mayhem that is October in the UK having arrived back from our franco-spanish jaunt on Monday evening. In fairness today is nice and sunny but it was seriously wet late Monday and yesterday. Got drenched unloading car from trailer and parking the ensemble up. Just what you need after a 7 hour journey.

Reality is kinda real I suppose.

It's an odd feeling getting trench foot and sunburnt on the same day...

Hello Doggy, glad you're back safe and sound. Hello Ginger whilst I'm being polite

Last Sunday I did two tip-runs in the C4....loading up first time it was raining heavy and I was kinda hiding between the tailgate and our Garage door but by the second run it was properly pissing down and I just though f*ck it I'll get wet....the tip operatives were hiding in their 'office' and the place was deserted apart from me...piss wet through and unloading sh*t from the car.

Still, the rain allowed me some cover to not-quite dispose of things in the correct 'departments' of the tip. To the person in the future who finds a large garden water feature made from some sort of resin bonded sh*t in land-fill then I'm sorry....it was me

Hi guys, just a quicky as I've been rather busy. Hope you're all ok.

We've sold my house, that's the main reason I've been busy. I've left loads of stuff there, like my big compressor (possibly a bomb) and the metal cabinets (possibly a mistake but I was never overly impressed with them). It's a young couple just getting married so I was hoping to leave most of the stuff in the house, the furniture and my old double bed are still there but t'wife wanted all the crockery and all the saucepans etc, I've no idea why, none of it is that good and we have no room for it all anyway. We now have cupboards that you can only get stuff into if you're good a tetris and a second microwave that's too big for the shelf in the kitchen! Brilliant

Most of the stuff came back in the yoyo but today I've been up there with mate Goran, who still has some stuff in my garage, and we've bought the Matchless here. Finally, I can work on it!

And before that I was busy overhauling the boiler room here. As I'd emptied it of all the crap that's gone in the shed t'wife decided that it would be a good opportunity to repaint it

I guess it was in a bit of a state but I could've done without the extra work. Clear out everything, strip out the wiring, pressure wash walls, floor and ceiling, repair the floor where condensation from the old boiler ate it, repair and paint ceiling, walls and floor and rewire with new power points for the freezers and proper feeds for the boiler, pump and outside light (always pissed me off). Between everything else I needed to do, like clear the garden, it took 2 weeks 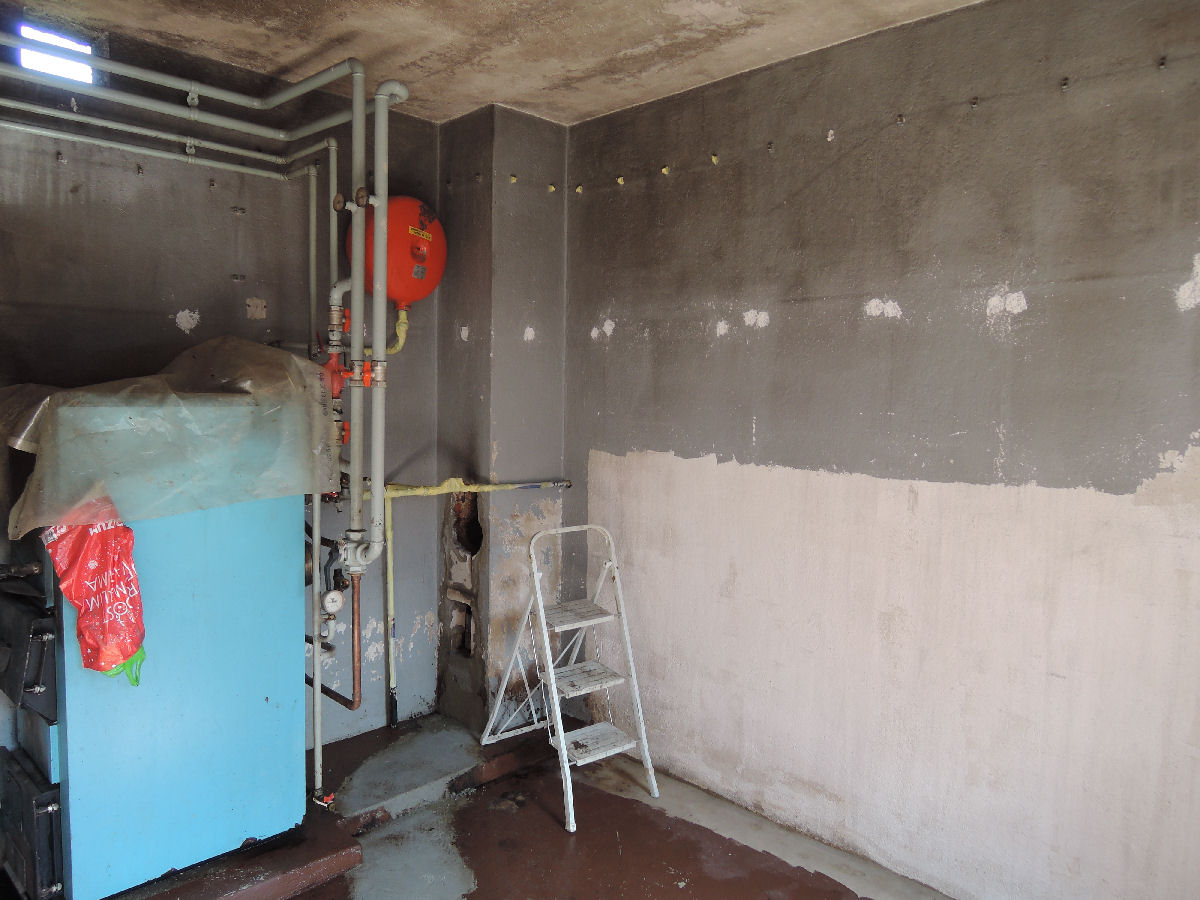 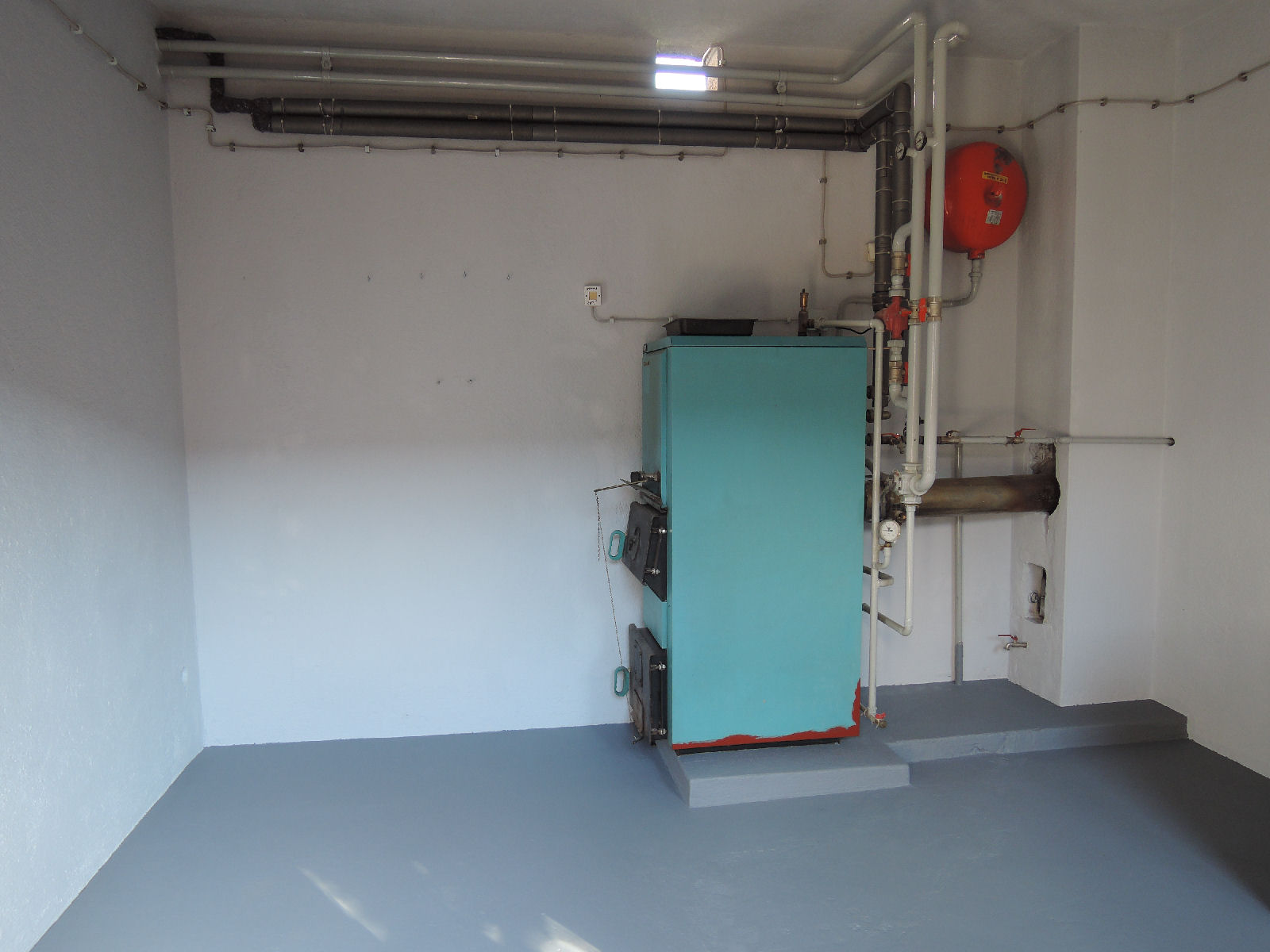