As hard as it might seem, you may have to view from a distance and let nature take its course. This might sound harsh but if the kittens/mother were doing this in a shed somewhere unseen you'd have no control over what happens.

There's also something about keep touching a kitten that the mother won't like it? or something.

I dunno, I think I'd be the same as you and want to babysit the kitten 24hrs but then get upset when it doesn't help (feel like you failed) etc.
Cars in my care:

I've been popping up every hour or so, dreading it every time, he's still going but he's fading. It's really skewing my feelings though, I shouldn't be dreading checking up on them and I'm starting to see the greys as some sort of threat as I try to keep them away from him as I try to make him feed. I'm neglecting Annie too.

That would be rabbits - sis-in-law Claire said something similar but, when they were born, I had to move 2 as she'd moved away from them to have the others. I thought if I left them where they were they'd get cold so I carefully moved them to where she was. I asked Mirela 'cos it was worrying me but she said it was fine. Btw I've no idea which 2 I moved as they were wet and all looked the same, but I have my suspicions.

I think this is pretty inevitable, I've tried to help but I have myself fairly convinced there is nothing more I can do.
Unskilled meddling sin©e 2007

Well, he's gone. It must have been at about 6:30, I was outside digging out the apple stump which is probably for the best as I'd have only panicked uselessly. It's sad but I realise these things happen, after all it's why I didn't want to name them yet. And now he's gone I can concentrate on Annie and the other kittens. I'm afraid there won't be any more pictures for a while (maybe without a flash) as their eyes are open

They also seem to be hearing, so I'd better keep the noise down (I was making handrails for the stairs for t'wife). I'll pop the little guy in the lawn tomorrow morning (weather willing) next to his sibling - hey, he's still a cat, not a mouse or a rat!
Unskilled meddling sin©e 2007

Oh dear, sorry again about that

, I guess that's how things are meant to be there but you'll soon be chasing the survivors around the house and cursing them

Thanks mate. Well, I hope they'll be causing mayhem, right now I'm still in panic mode - are they eating enough? Does that one look a bit too small? Why don't they want to feed? Why is that one heading away from Annie, is he like one of those penguins that take a wrong turn and end up in the desert? For now I'm just going to take yawning and stretching as a good sign, 'cos they're all doing that.
Unskilled meddling sin©e 2007

A swift kitten update, they'll be 2 weeks old tomorrow. We did have a bit of a worry as all their eye opened except one kitten, who still had one eyes mustly shut. I quick internet search provided the expected results, everything from "she'll be right" to "Panic! Risk of blindness, rush to vet's immediately!" I tried dabbing at it with a warm wet bit of cotton wool and then with chamomile tea with no change so t'wife phoned the vets Saturday and was told to bring her in Sunday morning if there was no change. Meanwhile, Saturday evening our usual vet Mirela, who's been on holiday, and her son Ian came for coffee, she had a quick look "oh, it's nothing" and just opened her eye with her fingers

All 3 are doing well, they are one boy and two girls. I took some pictures earlier but because their eyes are sensitive they're without flash and the AF turned off 'cos I thought the red light might be too bright. 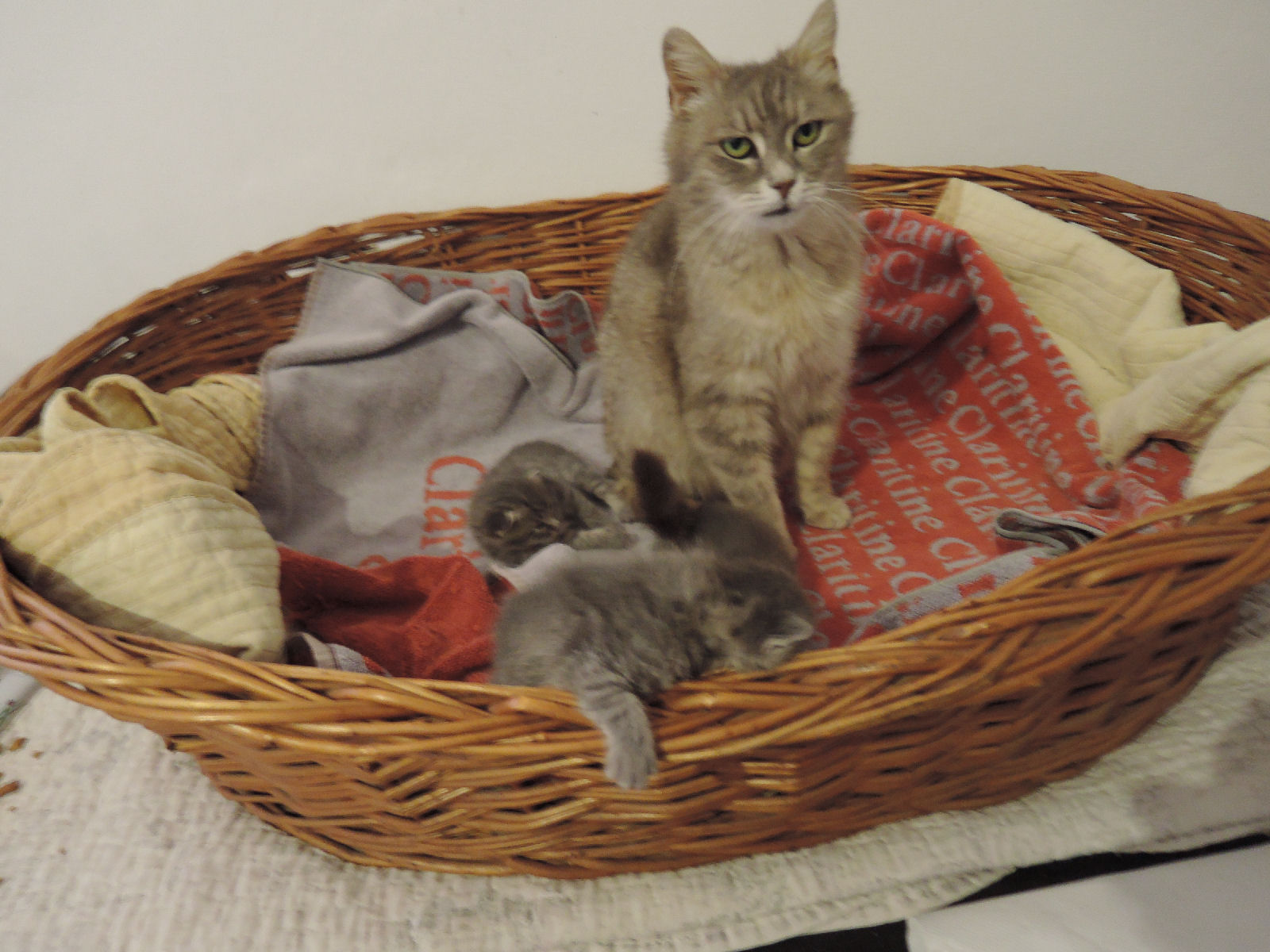 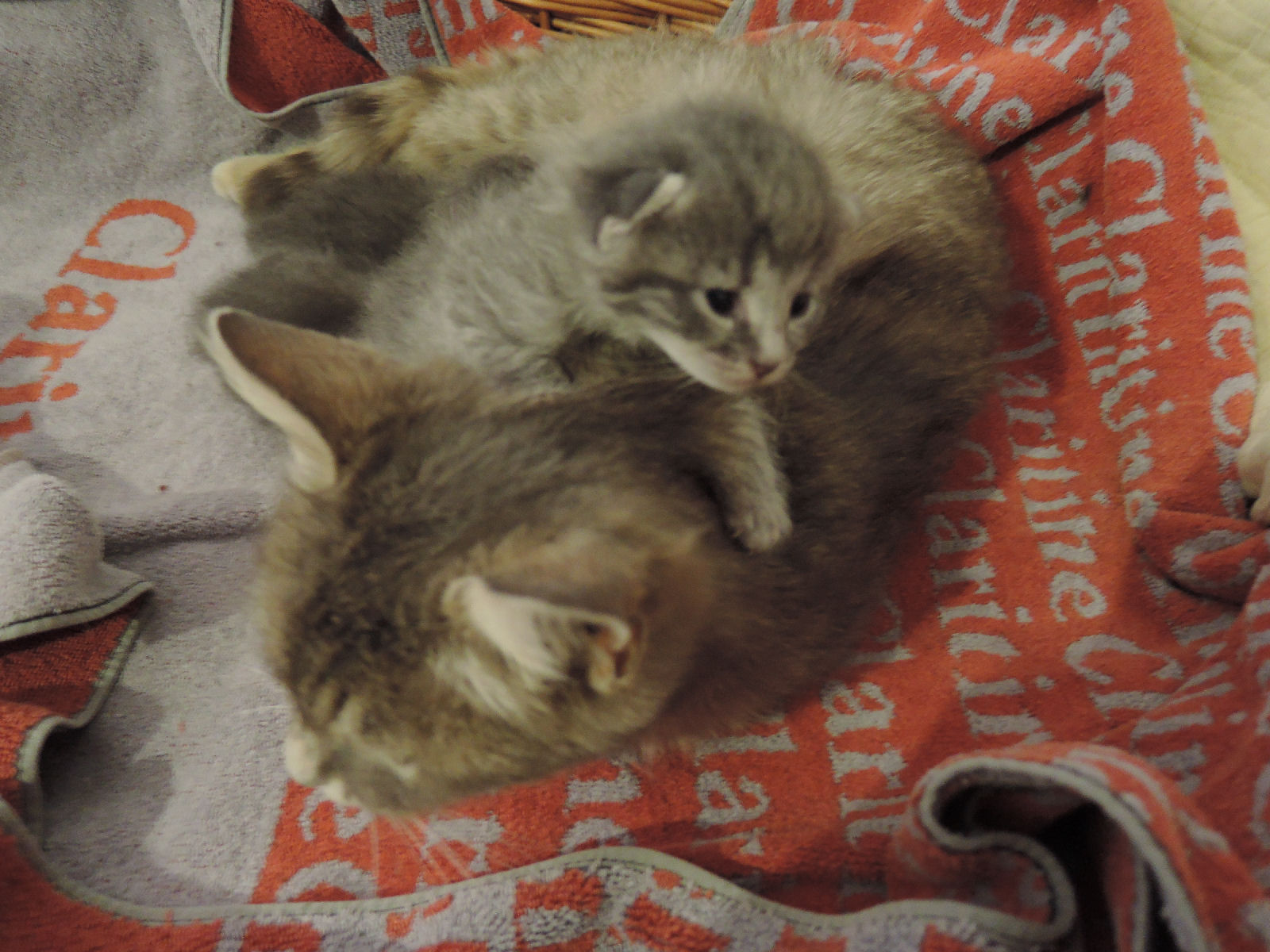 No, we're still not going to name them.

In other news, the apple stump is finally out 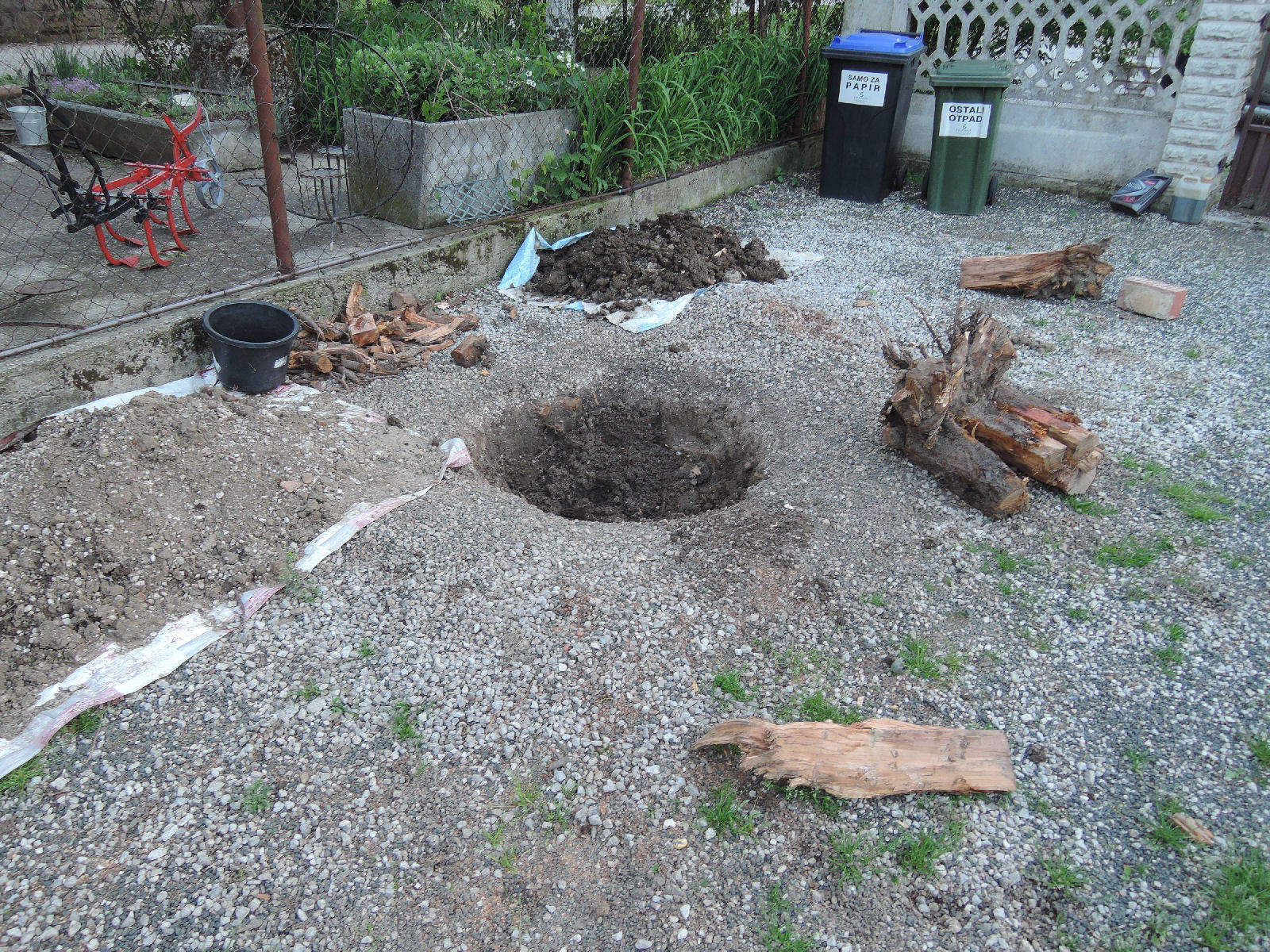 There were 2 roots heading off straight down. I managed to dig down far enough to get to them with the hatchet and out it came. 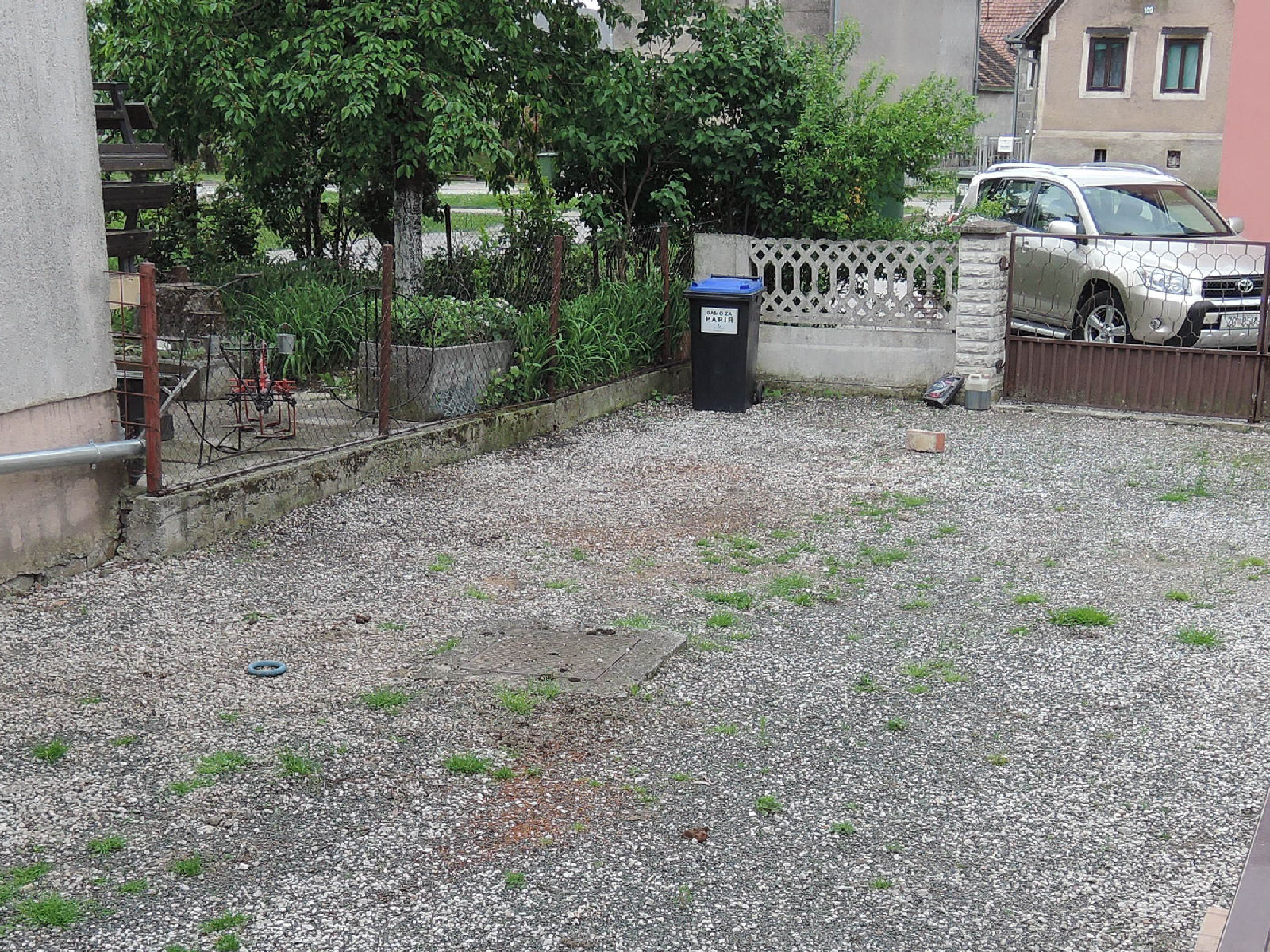 Also, I've been trading emails with my school buddy James 'cos birthday and he sent me a picture of us with the '66 Beetle we did up for his mum some 30 or so years ago 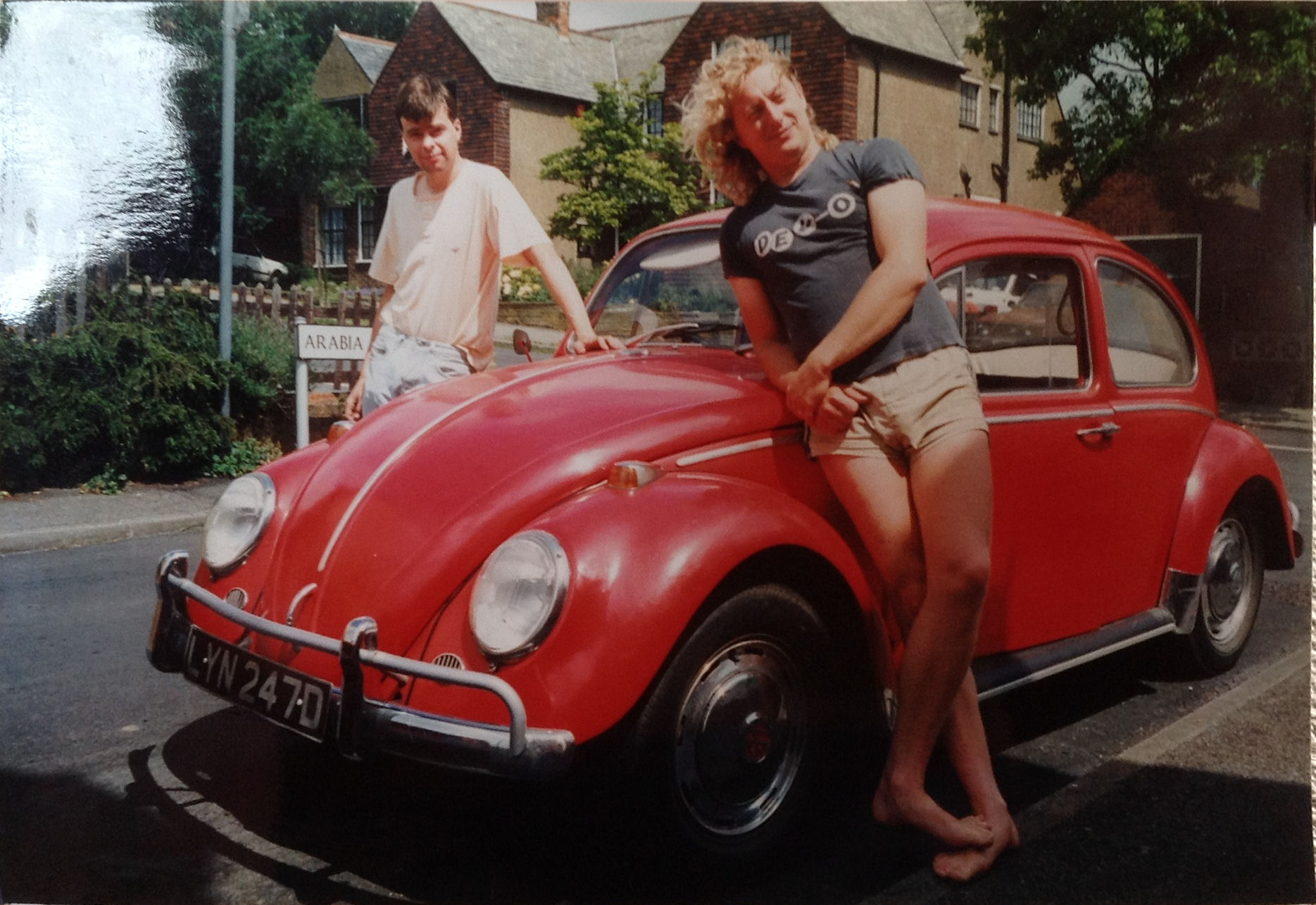 Which was a surprise 'cos I didn't think there were any. The babe magnet on the right is James, the skinny guy who looks like a young Walther Matthau is me (look: Hair!)
Unskilled meddling sin©e 2007

Thanks, we're kind of ok with it now though, as my wife says don't look at it as we lost 2, rather we gained 3. Plus if I'd realised sooner there wouldn't have been any (no!!) Or if she'd had them in a barn full of rats somewhere...

Btw I asked James when that picture was taken 'cos I couldn't remember, he says 1987 as he'd just got back from uni in California.
Unskilled meddling sin©e 2007

Good luck with telling them apart

lol at the one that went all the way round the back and up through the legs to get a 'purchase' on the milkage.

Thanks! Not a prob Bob, I hope I'm not boring people.

Yeah, they are pretty similar, although the little girl that seems to like going around the world is slightly darker, it's quite dark in there so it might be hard to tell. The other two are pretty much identical, although the one that seems to like making a lot of noise (and is usually trying to escape from the basket when I come in) is female, the other male, so there is a quick way of telling...

They all seem to want out of the basket now, so I'm thinking of putting them in something lower so they can come and go. I'll have to keep a watch on them to start off with as my biggest fear is coming in to find one of them floating face down in the water bowl.
Unskilled meddling sin©e 2007

I guess if they want to wonder around then they should do, from what I saw of 'those' kittens last summer they never go too far away from Mum

Can you put down very small water dishes, like a saucer?
Cars in my care:

Last night I hoiked the other two out and shifted the basket to the corner, I thought Annie would choose the best spot but she seems to be content feeding them wherever they are.

I'd have to put down about 10 water dishes, Annie gets through quite a lot of the stuff because she's in full dairy production I guess. I've put her bowl further away, they seem to be mainly around the other end of the room where all the beds are (basket, low box and Yoyo trunk liner) hopefully that's too far from them, while close enough for Annie. For them I've just put down a saucer of water, it was empty this morning but I think Annie was too lazy to climb onto the box where I put her bowl last night. I did see the adventurous female (who I might be calling Grace) drinking from it briefly last night but today it's just an accidental paddling pool.

Now the kittens are out and about Annie's making another range of noises I've not heard before, presumably to attract them. I should try to record them really. Of course, being basically cats, they're not paying a blind bit of notice

We convinced ourselves that our cats pay attention when we called their names....until I found they would still give you a half-arsed "what you shouting me for" gaze if you called them "Dave", "Tree", "13A Plug"

Just to prove me wrong


Sorry it's a bit quiet, camera's a bit shagged. Of course, when I went up to clean her litter tray she made one hell of a racket

I guess the problem is they don't know they have names, they possibly only hear a noise that means "Here is food." Or possibly "unwanted attention time."
Unskilled meddling sin©e 2007